Sushi buffet Haiku with a maritime atmosphere focuses on quality in both service and décor.

Sushi buffet Haiku with a maritime atmosphere focuses on quality in both service and décor. The quality can also be seen in their interior design where special attention has been paid to the fittings and materials. The interior concept of the restaurant chain was done by a designer from Signa. Signa has designed the interiors of four Haiku restaurants – two in Helsinki and two in Jyväskylä.

Enjoy Haiku with all your senses

Haiku owner, Emily Wu, wanted an interior design concept for her restaurants that challenged the traditional buffet model. “A buffet doesn’t need to consist of a lunch line. We want people to relax with good food and enjoy themselves,” says Emily.

The restaurants were designed with the customer in mind. Groups of sofas were placed in the restaurant and partitions were built from wooden bars to add intimacy and visual appeal. A piece of furniture was designed for the buffet and embedded in the rest of the interior.

Haiku’s colour scheme is full of functional contrasts. The colour combination of salmon-red and petrol is effective and fits in well with Haiku’s signature waterfall image. Warm olive wood was chosen as the material for the furniture and other structures.

Haiku’s furniture and prints were made in Signa’s own production facilities in Petikko, Vantaa. . In addition to the new restaurants, the client’s previous restaurants have been furnished and given a light facelift. “Signa has been easy to work with. I appreciate the creative design and high-quality in-house production,” says Emily. 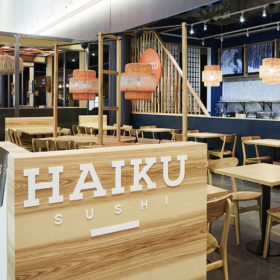 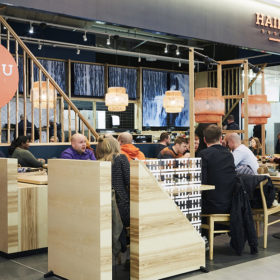 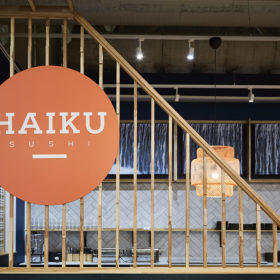